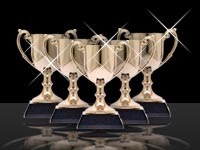 It's that time of year again... I bring you the second annual InfoSec Tweet Awards!  Okay, like last year there are no actual awards. These these are just some of the more entertaining or thought provoking tweets that I "favorited" throughout the year.


Every move you make Every call you take Every note you write Every single site I'll be watching you. #NSAlovepoems
— Justin Brookman (@JustinBrookman) August 24, 2013


@krypt3ia There is a huge difference between hiring hackers and hiring convicted criminals. I am a hacker. I am, however, not a criminal.
— Dave Marcus (@DaveMarcus) August 13, 2013


One day, the world will learn that hackers don't "break things", they "understand" them and produce "unexpected" outcomes.
— Eireann Leverett (@blackswanburst) May 4, 2013


@spacerog @ITSecurity @SpiderLabs There's 'real name' and then there's the name your parents give you at birth
— Martin McKeay (@mckeay) August 20, 2013


Remember typing BASIC listings out of a magazine in order to play a game? You don't? Then step out of the way, junior!
— Pinboard (@Pinboard) May 2, 2013


someone needs to come up with a secure java replacement. we'll call it decaf because it won't keep security people up at night
— kurt wismer (@imaguid) March 1, 2013


To: New InfoSec Pros From: Me Message: A deep passion for your work is a requirement in this industry. <EOM>
— Jonathan Claudius (@claudijd) July 25, 2013


Security signs that begin with "For your protection..." essentially end with "...we will restrict freedoms & invade privacy"
— Neil deGrasse Tyson (@neiltyson) March 3, 2013

And the winner is.... Info Security Jerk (@infosecjerk). Info Security Jerk says what we are all thinking. His tweets are consistently funny, all the more so because they are rooted in the day-to-day life of those who work in InfoSec. If you follow one new person this year it should be him. Below are three gems from 2013:

Listen up kiddies, once you're past Junior Tool Monkey, security involves stuff that may be unpleasant..like policies, politics, and people.
— Info Security Jerk (@infosecjerk) August 28, 2013


See Dick get an email. See Dick reply with his username and password. Don't be a Dick.
— Info Security Jerk (@infosecjerk) October 8, 2013


There are 2 kind of people in this world..and they both suck at security.
— Info Security Jerk (@infosecjerk) October 24, 2013


This concludes the 2013 Tweet Awards. Please feel free to share your favorite tweets in the comments below. I wish you and yours a very Happy New Year!