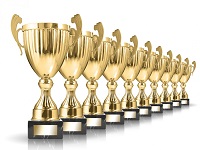 It's December 31th so that must mean it's time for the 4th annual InfoSec Tweet Awards!  Over 2,100 of you read last years post (my 2nd most popular to date) so it seems I should continuing the tradition.

As in previous years, there are no actual awards.  These are just funny or thought provoking tweets that I've "favorited" over the year (yes, I know twitter now calls them "likes").  As always, categories are completely arbitrary. I make them up as I go along...

.@mzbat Santa is a member of the Red Team. He breaks in undetected, steals your cookies, and leaves packages that everyone thinks are legit.
— Richard Westmoreland (@RSWestmoreland) November 30, 2015

An email offering me a free book on phishing. Too meta to consider sober.
— Jack Daniel (@jack_daniel) April 30, 2015

If cloud computing is the opposite of in-house IT, why don't we call it "out-house computing"? Oh.
— Patrick Gray (@riskybusiness) August 31, 2015

Hospitals keep track of where beds are by triangulating their WiFi. This isn't the dawn of IoT, it's more like noon and we're still asleep.
— ra6bit (@ra6bit) April 30, 2015

The most common "threat intelligence" I see is a threat to my intelligence.
— Jack Daniel (@jack_daniel) March 30, 2015

There are reports saying @TenableSecurity "poached" a recent hire. For the record, that's untrue- he was not immersed in simmering water.
— Jack Daniel (@jack_daniel) February 26, 2015

The women and men who wrote the nearly bug-free code that controlled a $4Bn space shuttle and the lives of astronauts worked 8am to 5pm.
— Nick Stenning (@nickstenning) March 25, 2015

I need a generic acct Why? For vendor support teams No, they need individual accts That's too much work! For U or the hackers? <silence>
— Razz-Ma-Tazz (@GRC_Ninja) February 6, 2015

Hey boy, are you my password? Because you are insecure and weak as hell and ultimately will betray me.
— Sarah (@thetigersez) July 16, 2015

KID0: "Dad, this game does not work, can you check the firewall?" Me: "Please submit a change request" #GeekParenting
— Xavier Mertens (@xme) February 16, 2015

"I don't understand. When we deployed this application in 2004, you approved telnet." #blueteamlife
— Ben Jackson (@innismir) October 1, 2015

And the winner is.... Security Humor (@SecurityHumor)! Security Humor is hardly a new account. This month marks the sixth year s/he has provided funny quips 140 characters at a time. The Security Humor account has been in the running for this coveted(?) award for the last two years and only narrowly lost to InfoSec Taylor Swift (@SwiftOnSecurity) and Info Security Jerk (@infosecjerk)

If you follow one new account this year it should be @SecurityHumor. Below are a few recent gems:


If you love something, encrypt it. If it decrypts, it's yours. If it doesn't, use the backdoor. #GovernmentLovePoetry
— Security Humor (@SecurityHumor) December 14, 2015

Q: How does a computer engineer fix a broken furnace? A: They spin up more servers in the rack. #ThatShouldFixIt
— Security Humor (@SecurityHumor) November 25, 2015

When the world is ready for a hacker magic duo, they'll call themselves Pen & Tester.
— Security Humor (@SecurityHumor) May 12, 2015


This concludes the 2015 Tweet Awards. Please feel free to share your favorite tweets in the comments below. I wish you and yours a very Happy New Year!